Ten years ago, I officially entered the world of romance writing when I submitted a manuscript for the Romance Writers of America Golden Heart contest. To my utter amazement and delight, I made the finals in November, 2010. That moment gave me the impetus and encouragement I needed to send me down a path to becoming a published author. To celebrate, I’m taking a look back at my first published series, which will be on sale through the month of November. 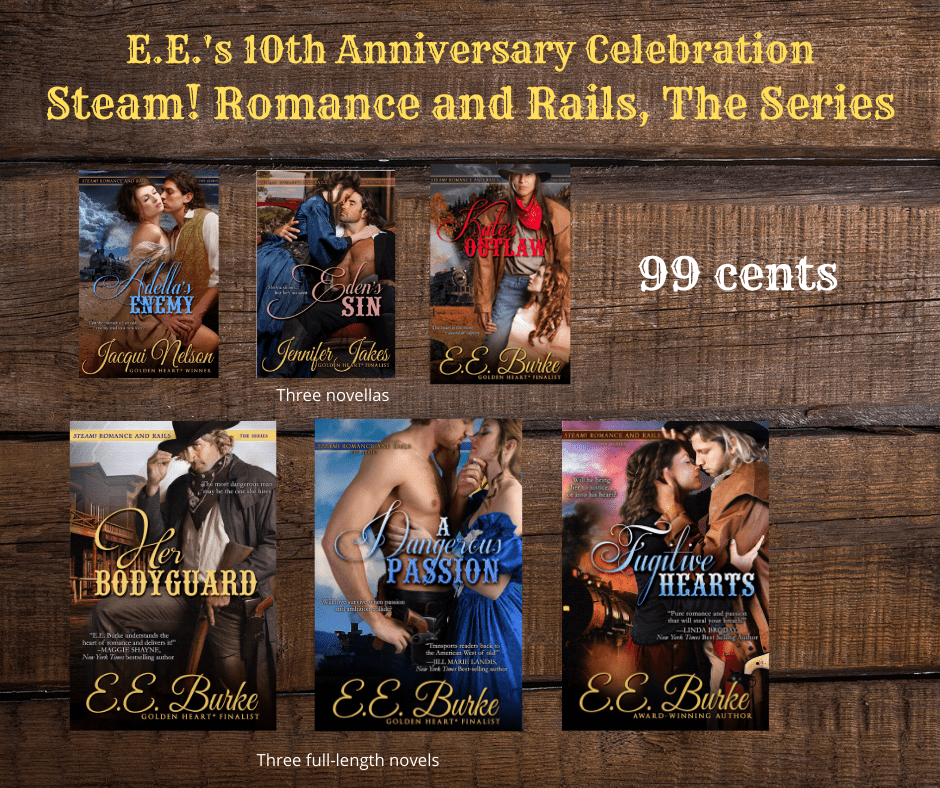 It all started with an idea and a friendship with two other 2010 Golden Heart finalists, Jacqui Nelson and Jennifer Jakes.

I had been working on a railroad romance, and we were all ardent fans of the series Hell On Wheels. I proposed a joint effort, which we turned into three love stories woven together around a common historical event–a gritty, glamorous railroad race akin to Hell On Wheels, only with happier endings.

The anthology Passion’s Prize launched the series with Adella’s Enemy by Jacqui Nelson, Eden’s Sin by Jennifer Jakes and Kate’s Outlaw by your’s truly. You can still pick up each of the novellas originally featured in this anthology.

I’ll go into more detail on the historical underpinnings of the series in my next blog post. In the meantime, here is an interview I did shortly after publishing the first full-length novel of the series, Her Bodyguard.  Time wise, this story actually precedes Kate’s Outlaw, but it came out a year later. Each book is a satisfying read as a stand-alone, but if you enjoy building on an overarching story, I’d recommend starting with Her Bodyguard. 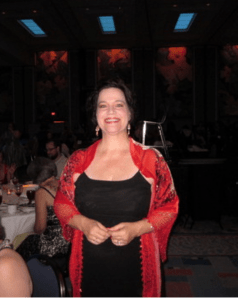 At the Golden Heart awards ceremony in 2010

What made you combine romance and rails?

That’s a good question. I guess something about the old steam railroads calls to my adventurous side, and to my romantic nature. But more specifically, when I touring a museum in Fort Scott, Kansas, a few years ago, I came across a small booklet about a railroad race. It had all the makings of an epic: crooked politics, underhanded landlords, angry mobs, liars, cheats, killers…I couldn’t imagine a more perfect setting for a great love story. As far as turning it into a series, I got that idea from the AMC television series Hell On Wheels. The show follows the building of the transcontinental railroad, which first joined both coasts of the United States. I became an instant fan, and the show’s popularity convinced me there is an audience out there for stories like these, and that includes romance.

Tell us a little about the series.

The first books in the series are set against the background of a contentious construction race through southeastern Kansas between two powerful railroads with long names. One was dubbed the Katy and other was nicknamed the Border Tier. The government promised the winning line free land grants and exclusive rights through this corridor into cattle-rich Texas.  So you can imagine, they pulled out all the stops and no one was above cheating. The series was actually kicked off in the anthology, Passion’s Prize, which features works by two other 2010 Golden Heart finalists, Jennifer Jakes and Jacqui Nelson. These three novellas follow the story of the Katy through the lives of three women who get caught up in the race.

Her Bodyguard, revolves around the story of the Border Tier. While its crews were trying to win a race, the railroad was feuding with settlers over land rights. That’s really the focus of my book. The heroine, Amy Langford, is a wealthy widow who’s invested heavily in the railroad and is looking for ways to appease the settlers so they’ll stop vandalizing the tracks. Only, someone is out to kill her. The hero, Buck O’Connor, is an outlaw who comes out of hiding to help his cousin avoid financial ruin. Through a twist of fate, he ends up being Amy’s bodyguard. He uses his position to thwart her railroad and help his cousin, while at the same time trying to protect her. You can see that isn’t going to work. But it takes Buck awhile to recognize this. He’s pretty sure of himself.

How much of the story is based in fact?

Quite a bit, actually! Honestly, I couldn’t come up with better scenarios than those I find in history books. The race really happened pretty much as it’s written, the settler’s riots, too. I love to use real events and include historical characters. In this case, I put two people very attracted to each other but with opposing goals in the middle of a cutthroat railroad competition and a land war. It was fun to see how they reacted.

You talk about your characters as if they’re real people.

In my mind, they are. But I try not to talk to them when other people are around. Characters come to me fully formed. Sometimes they appear before the story, and sometimes they come out of the story. But I always make sure I get to know them as much as possible before I start writing.

Your books are based in the American West during the nineteenth century. Why that place, and why that era?

I write what I love best. I’ve always been a history geek, and particularly American history. I really got fascinated with the Western expansion when I first moved to Kansas (I won’t say how many years ago or I’ll really out myself). That period of expansion had such an impact on this country, good and bad. I don’t think people realize just how much. There are so many stories that haven’t been told and I want to tell them.

I try to strike a balance between gritty realism and romance. I suppose I do err on the side of romance, but in many ways, that Victorian era was very romantic—even in the “Wild West.”

Start the series with HER BODYGUARD 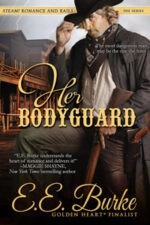 The most dangerous man may be the one she hired.

For America “Amy” Langford, investing in the Border Tier Railroad isn’t about chasing riches. The savvy businesswoman is after bigger stakes: influence, respect, success her father didn’t live to see. Rioting settlers and underhanded competitors can’t stop her, but a killer might. When a ruggedly handsome drifter comes to her rescue, she trusts her instincts and hires him as her bodyguard.

Buck O’Connor has put his violent past behind him, but being a wanted man dictates a life of deceit. So what’s one more lie? He becomes Amy’s protector so he can secretly thwart her railroad’s progress to help his cousin avoid financial ruin. A great scheme—until he falls in love.

While Buck hides his true purpose, Amy lies to herself about her growing feelings for her bodyguard. But the price for deceit is steep, and the secrets they both hide could destroy their future—if they survive.

Other books in the series include:

KATE’S OUTLAW: After a railroad heiress is abducted, one of her captors becomes her protector. On the run from danger with enemies on all sides, they discover a love as powerful as it is forbidden.

Originally part of the anthology Passion’s Prize. Catch up on the stories of two other women caught up in a dangerous race for riches in Adella’s Enemy by Jacqui Nelson and Eden’s Sin by Jennifer Jakes.

A DANGEROUS PASSION: An inquisitive author sets out to expose a charismatic railroad baron and becomes ensnared in a deadly mystery and a dangerous passion.

FUGITIVE HEARTS: When a newly-made widow tries to cover up the truth behind her husband’s violent death, her plan backfires, sending her fleeing from a hardened lawman determined to bring her to justice.