Travel to a place with few rules and no limits…

Meet dangerous men and daring women caught up in intrigue, mayhem and murder, as the railroads advance across America’s frontier. 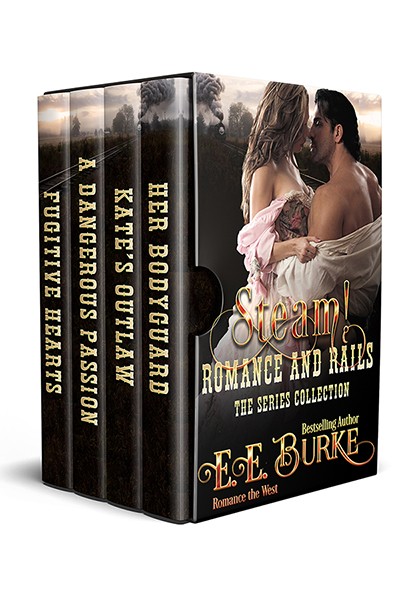 HER BODYGUARD: A woman embroiled in intrigue employs a bodyguard to protect her from a killer, unaware that he’s an outlaw hired by her enemies to put a stop to her plans.

KATE’S OUTLAW: After a railroad heiress is abducted, her Indian captor becomes her protector. On the run from danger, with enemies on both sides, they discover a love as powerful as it is forbidden.

A DANGEROUS PASSION: An inquisitive author sets out to expose a corrupt railroad baron and becomes ensnared in a deadly mystery and a dangerous passion.

FUGITIVE HEARTS: When a newly made widow tries to cover up the truth behind her husband’s violent death, her plan backfires, sending her fleeing from a hardened lawman determined to bring her to justice.

If you’re a fan of passionate romance woven with rich historical detail and a dash of suspense, this series is for you. Grab your set today:

Inspiration for the Steam! Romance and Rails Series

Historical events and bigger-than-life characters, similar to those that inspired the hit television series “Hell On Wheels,” inspired Steam!. In the second half of the nineteenth century, the United States entered a time of explosive growth and expansion that has been unmatched since. The country had just emerged from a devastating war and its people needed to have faith in something. That something turned out to be what railroads represented: opportunity and hope for the future.

The hotly contested  construction race between the Missouri, Fort Scott & Gulf Railroad Company (nicknamed The Border Tier) and the Missouri, Kansas and Texas Railway (more commonly known as The Katy) encapsulates the spirit of these times and the challenges. This race turned out to be the perfect setting for an action-packed, suspenseful historical romance series.

Her Bodyguard follows the history of the Border Tier and tells the story of an unlikely romance that develops between a wanted man and a wealthy widow caught up in the cutthroat railroad race and a violent settlers’ revolt.

Kate’s Outlaw is inspired by the Cherokee people’s response to the railroad’s encroachment on territory that was promised to them “forever” after they were forced from their Eastern homelands.

The exploits of a indomitable Katy Railroad executive and the legend of a family of serial killers provides fodder for A Dangerous Passion. Ride the rails with the sheriff in Fugitive Hearts from the Katy Railroad’s headquarters in Parsons, Kansas, down through the Indian Territory in search of a fugitive who also happens to be the woman he loves.

The rich history of the railroads has inspired new ideas for more books. You haven’t seen the last of this series.