Steamboat pilot Huck Finn, who values his freedom, steers clear of any entanglements that might tie him down…until he takes charge of an orphan boy who needs rescuing.

Huck couldn’t tear his attention away from the black-garbed woman hovering over Tad. If he didn’t know better, he’d swear Providence had gone and raised Miss Watson from the dead—or the spitting image of her anyway, only younger, before she’d gotten all pruned up.

The last time he’d seen the old lady was nigh on fifteen years ago when he’d stayed with the Widow Douglas for a few months on account of her asking. Mrs. Douglas had been kind, but her old maid sister had ‘most pecked the flesh off him, threatening him with hell every time he hadn’t sat right or talked right or even breathed right. Nothing could have compelled him to stay in the same house as that old crow.

When he saw her ghost coming at him from across the room, he nearly took to his heels.

About the time he realized the woman was too solid to be a haint, he could also see she was too young to be Miss Watson. By a couple decades at least. Still, she gave a remarkable impression, what with her black hair scraped back and her cheeks drawn in tight like she was sucking a lemon. She even had that same slim figure covered over by a shapeless black dress and round glasses that made her eyes look owlish as she blinked at him with disapproval. For a moment, he thought she might set into him with a spelling book or a switch.

“Miss MacBride, may I present Mr. Finn.” The lawyer’s introduction jerked Huck out of the trance, and he snapped his teeth shut. He’d been standing there gaping like a fish when he ought to be smiling and shaking her hand. If this woman was who she claimed to be, he could be rid of the child in a jiffy.

“And you, Mr. Finn.” She gave him a brief glance before turning her attention to the child. “Thaddeus, did you enjoy the train? Would you like to ride it home?”

Huck drew his hand back, nettled at the abrupt dismissal. Had she not let him finish because he spoke too slowly or because she thought he was slow in general? Based on the way she’d eyed him, she had already passed judgment and decided he wasn’t guardian material. He knew that, but it had nothing to do with the way he looked.

The boy jutted out his jaw. “My name’s Tad, and I don’t like trains.”

She bolted up straight as a soldier.

Huck had anticipated the response. If he’d spouted off like that, Miss Watson would have rapped him with her ruler then stuck him in a closet on his knees and made him go without dinner.

Instead, the aunt put her hand on Tad’s head and stroked his hair. Miss MacBride’s fingers were long and elegant, not the scrawny claws Huck remembered his old teacher having.

And her voice, that was different, too; not screechy like fingernails down a chalkboard, but low and smooth. Huck reckoned if she stroked his hair and talked soft to him like that, even he might be convinced to get on a train.

The direction of his thoughts stopped him cold.

He wasn’t attracted to a buttoned-up, priggish woman, even if she did have pretty hands and a soft voice.

“Don’t you want to come home with your Aunt Hallie?” she crooned to the child.

The polite look fell away and tears welled in her eyes.

Huck frowned, having a hard time separating the woman in front of him from the ghost of his past. Miss Watson didn’t weep over ornery boys—she thrashed ‘em—and her eyes weren’t the color of new grass on a hillside. Not that it made a lick of difference. He didn’t care about this woman’s eyes or any other part of her.

She blinked as if the tears annoyed her. “I’m very sorry you don’t know me, Thaddeus, but I promise we shall soon know each other very well.”

Now that was downright suspicious. Why wouldn’t Tad know her? The lawyer hadn’t acted like he’d expected her, either. Come to think of it, why hadn’t the widow put her grandson in the care of his aunt? Any woman, even a spinster, was better than a man gone missing for fifteen years.

Huck sniffed. Something smelled here, and it wasn’t just him.

“Beg your pardon, miss.” He wanted to ask her a few questions.

She pointedly ignored him and turned her attention to the lawyer. “Mr. Dubois, I know my claim comes as something of a surprise. I wrote to Mrs. Douglas, but I fear she may not have received my letter before she passed on. The fact is, I am this boy’s only surviving blood relation, therefore his proper next of kin, and I am fully prepared to care for him.”

The way she kept wringing her hands made Huck wonder.

“You are not married,” the lawyer pointed out.

Neither was he, Huck thought but didn’t say it aloud. He wanted to hear Miss MacBride’s excuse before he opened his mouth again.

“No, I am not married. But…” She ventured to put her hand on Tad’s shoulder again, and when he flinched, she withdrew it. “I have sufficient income from a modest inheritance, and my mother left me a house and property. It overlooks the Mississippi River across from the town where Thaddeus lived with his grandmother. I feel certain if Mrs. Douglas had known of my interest in adopting him, she would have named me as—”

“No! I don’t wanna be ‘dopted by you!” Tad leaped up and rushed around the table, scrunching down behind Huck, tugged his sleeve. “Tell her, Uncle Huck. Tell her she can’t have me. She’s scary.”

Her lips turned down, green eyes flashed with frustration. She closed in like she was set to grab Tad and fly away. “Thaddeus, there’s no cause to behave like that.”

Her starchy tone made Huck’s hackles rise. Just like Miss Watson, this woman didn’t have a clue how to handle a boy. “Or what?” He straightened to his full height. “You reckon on locking him in a closet and praying over him?”

Her color drained, then flushed back into her cheeks in two bright spots. “I have prayed for this child since he was born. More than you’ve done, I’m certain.”

“I meant you got no need to bullyrag him.”

“Bullyrag! Why you—” Whatever she’d been about to say got sucked up in a sharp breath. “Did you even know he existed before Mr. Dubois tracked you down? You can’t possibly care one whit about Thaddeus. All I can assume is that you are after something. Money, no doubt.” She flung the accusation like a startled rattler.

Huck’s annoyance upped a notch. Forbearing a grouchy old maid for the widow’s sake was one thing, but he didn’t have to put up with this woman’s venom and neither did Tad. “Seems mighty strange a boy wouldn’t know his own aunty.”

Her chin went up and those green eyes flashed. “I have proof of kinship, and I can assure you my claim is stronger than yours.”

Tad tugged his sleeve. “Don’t make me go with her.”

The child’s distressed plea tore at Huck’s innards. Being subjected to a nasty-tempered biddy had been pure misery. He’d run away, but he’d been tough enough to survive. A young boy like Tad who’d been reared by his granny wouldn’t know how to get by on his own. He would be chained to this woman until he was grown, maybe longer.

Before Huck could stop it, a promise flew out: “You don’t have to go with her if you don’t want to.”

Tad beamed up at him.

Huck’s skin crawled with the itchy sensation of approaching calamity. He had no business getting involved with this child. According to Dubois, all he had to do was sign a paper and he was free. Only, now he’d gone and given his word.

He turned to Dubois, who’d been watching the exchange with the shrewdness of a raven. “You said Widow Douglas’s will gives me rights over this boy.”

“It does,” Dubois conceded without appearing to take sides.

“That means he don’t have to go with this woman lessen I say so.”

The aunt’s face flamed like a sunset. “Why…why you…” she sputtered. Then she appealed to the lawyer. “Mr. Dubois. I understand you have the authority to decide who is most capable of caring for Tad, and I assure you I am more than—”

“Miss MacBride,” the old gent broke in, putting a cap on her shrill objection. “I do beg your pardon, but Mr. Finn and I need to finish our business. After that, I should be delighted to meet with you to address whatever issues you might want to raise.”

She sputtered out like a candle. Her countenance took on such a crushed, wounded look, Huck almost felt sorry for her. Almost.

“Of course,” she murmured. “I’ll wait at the hotel.” With that, she turned on her heel and walked away. Her hand went to her face, but Huck couldn’t tell whether she was wiping away tears or adjusting the spectacles.

Another tug came at his sleeve, and he looked down into hopeful brown eyes. “Uncle Huck, does this mean I get to stay with you forever?” 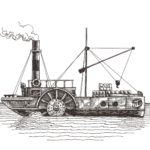